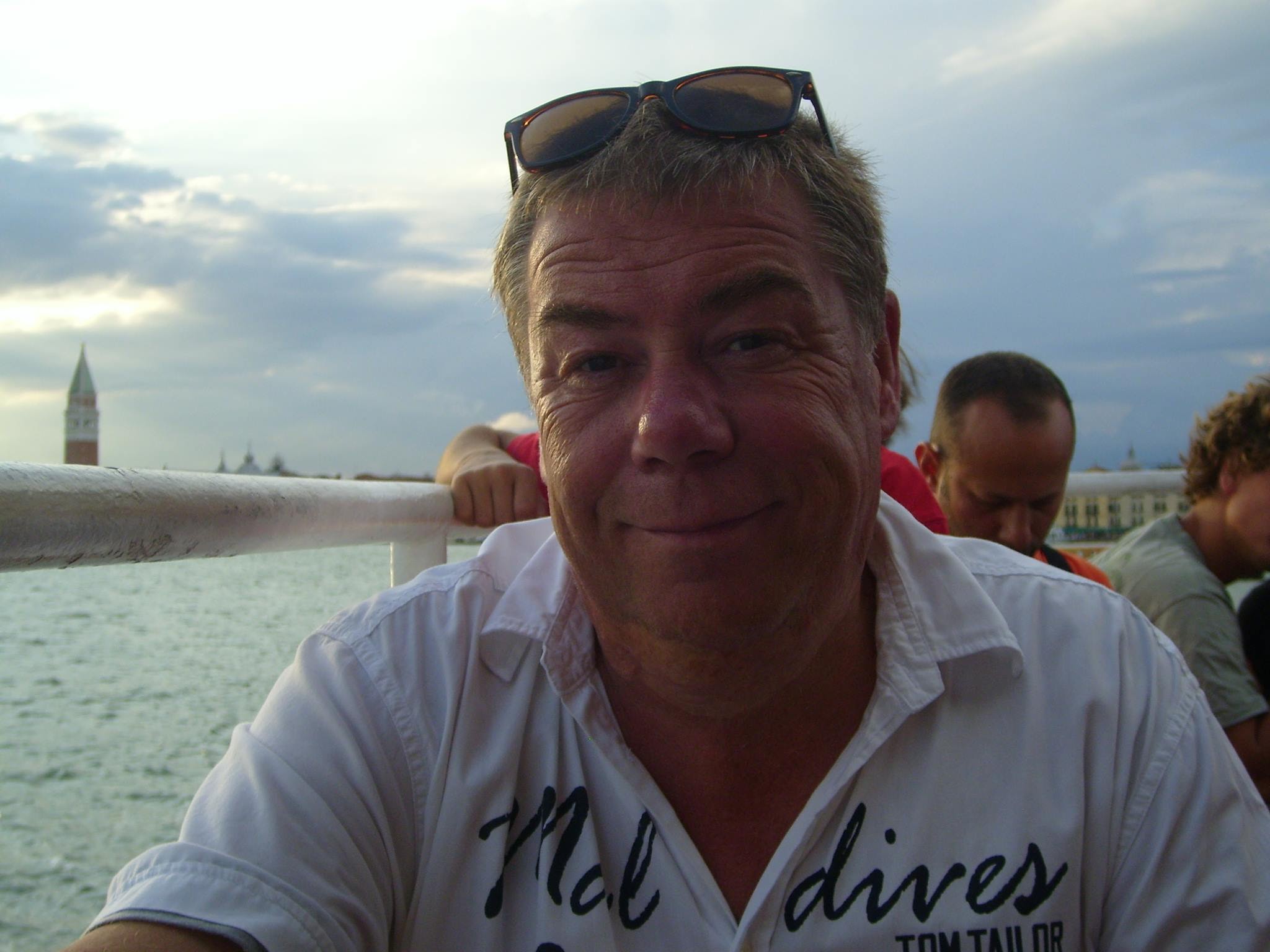 My name ist Stefan and I am born 1964 in Melle - Lower Saxony in the Northwest of Germany.

I am a passionated Radio Amateur and RV Camper.

I am licenced since 1990 in Germany as DG9BDI

Since 2016 I live in Döttingen/Switzerland and I am licenced as HB9GFX.

My Maidenhead Locator is "JN47DN"

I am a certified IT Project Manager. I love to play with data and create prototypes to later use in productive environments.

Beside the "real" Amateur Radio, I run the XLX508 Digital Amateur Radio Gateway to connect the world together.

I started in 1975 on CB Radio with a hand held radio "Weston HF1000" which is equal to the "DNT HF12" influenced by a friend who used the same radio for scout activities.

After several years doing CB Radio with different setups I met a friend who asked me to do my Amateur Radio licence.

I started using an "Icom IC-260" and later I changed my equipment more often, to be up to date and because of changing focus on activities

Also I did Satellite operations on AO-13 and followed the launch of Amsat-Oscar-40 which never realy worked due to a problem with the engine which burned something on the satellite.

Therefore I was realy dissappointed and focused back on VUSHF.

After the 6m band was opened by law to every Radio Amateur in Germany I started to have my focus on 50Mhz, the Magic Band.


This was one of my antenna setups during this time 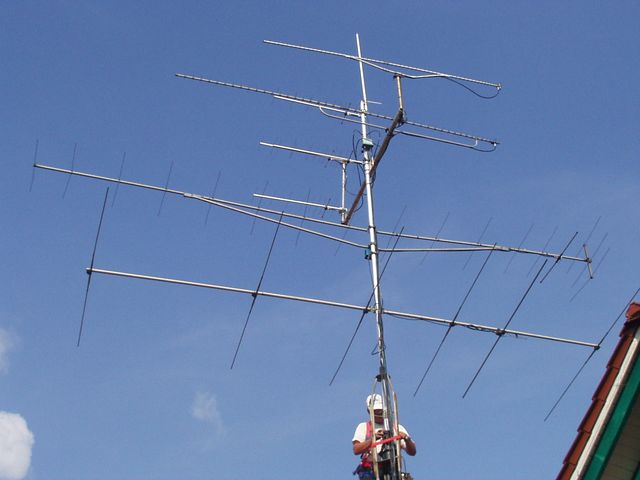 At least I operated from home with 6 Element "Create CL6DX" for 6m.

All was mounted on a 12m Versa Tower which was mounted sidewards to my house with a wallmount.

For 13cm I used the same IC-7000 with a Transverter LT13S and Transistor Amplifier with 30Watts out.

I was very active on the 6m (50Mhz) band and also worked many stations on the VUSHF Bands.

In 2011 we deceided to move to South Germany and later to Switzerland because my employer made a nice offer for a new job position in Zurich.

In South Germany I had no chance to build up any antennas so I sold most of my equipment which I used before.

Because I wanted not to give up my hobby completely and because I met some people doing contesting I joined the Contest Station DR5T and bought an Icom IC-9100 full equipped with all Filters, DStar and 23cm module to use it during the contests with DR5T.

So I came to DStar first and after I learned how Dstar works I found an old Radio Amateur Friend Rolf - DG9YIB who influenced me realy on digital modes.

So the full "Digital Story" began.

After the movement to Switzerland there was a small chance to build up some antennas so now I have a Comet GP92 for 2m/70cm/23cm. Better that then nothing.

The Monster with 2x GK71 1KW out homemade by DJ1QQ: 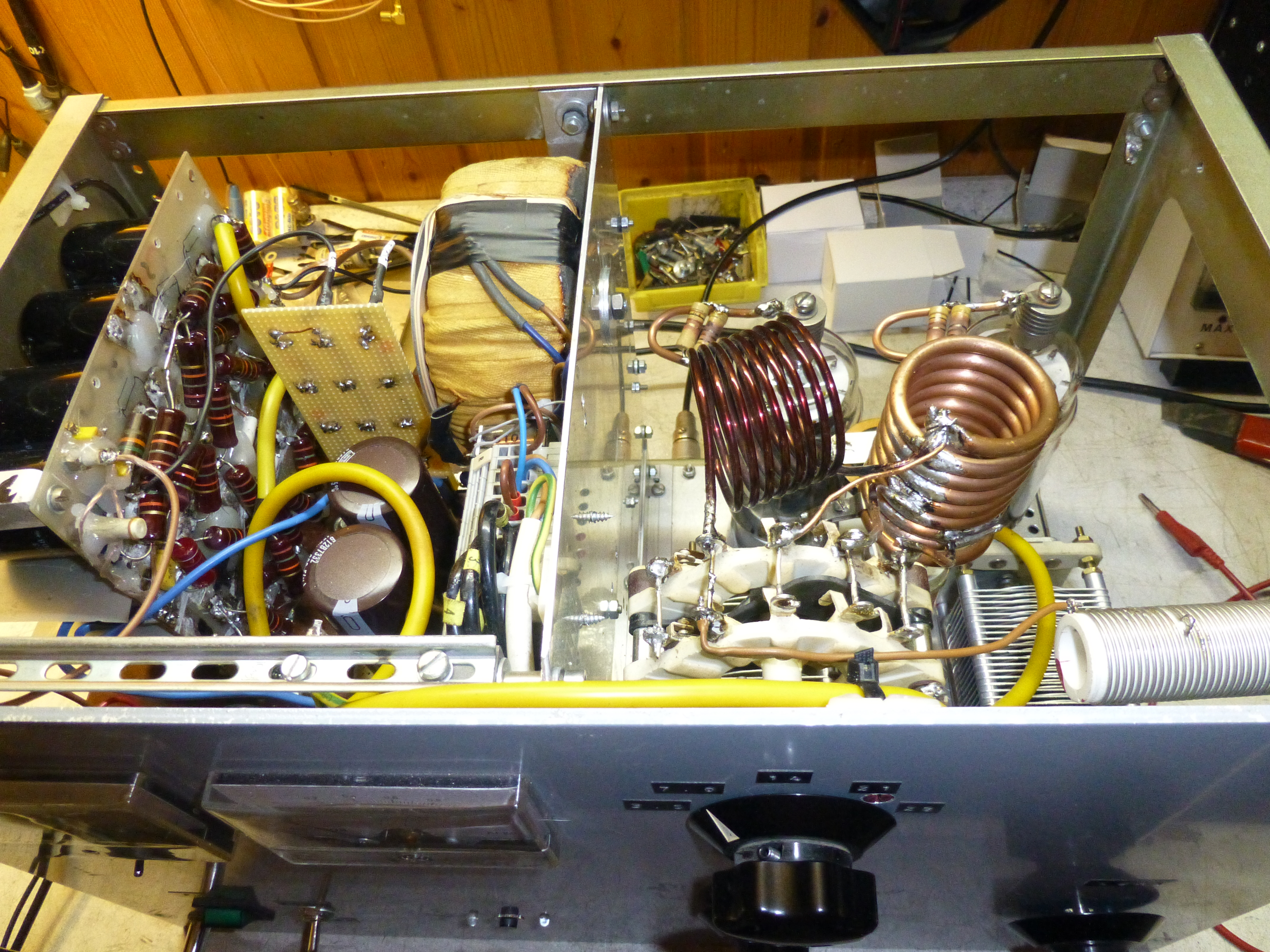 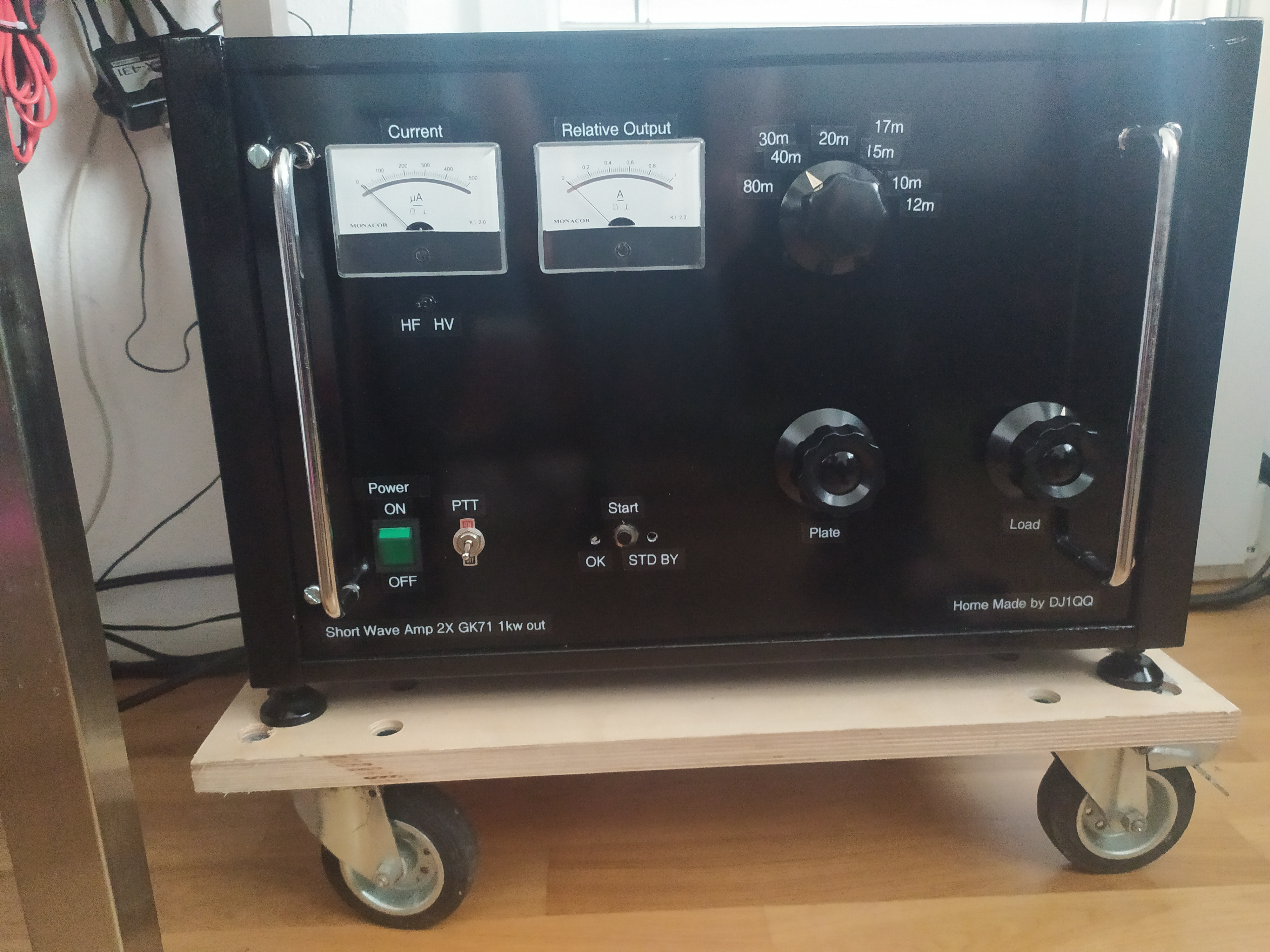 
On the picture above you can see the 30kg "monster" which deliveres all in all around 1kW out at 100W in on all SW bands.


This is my todays tiny shack: 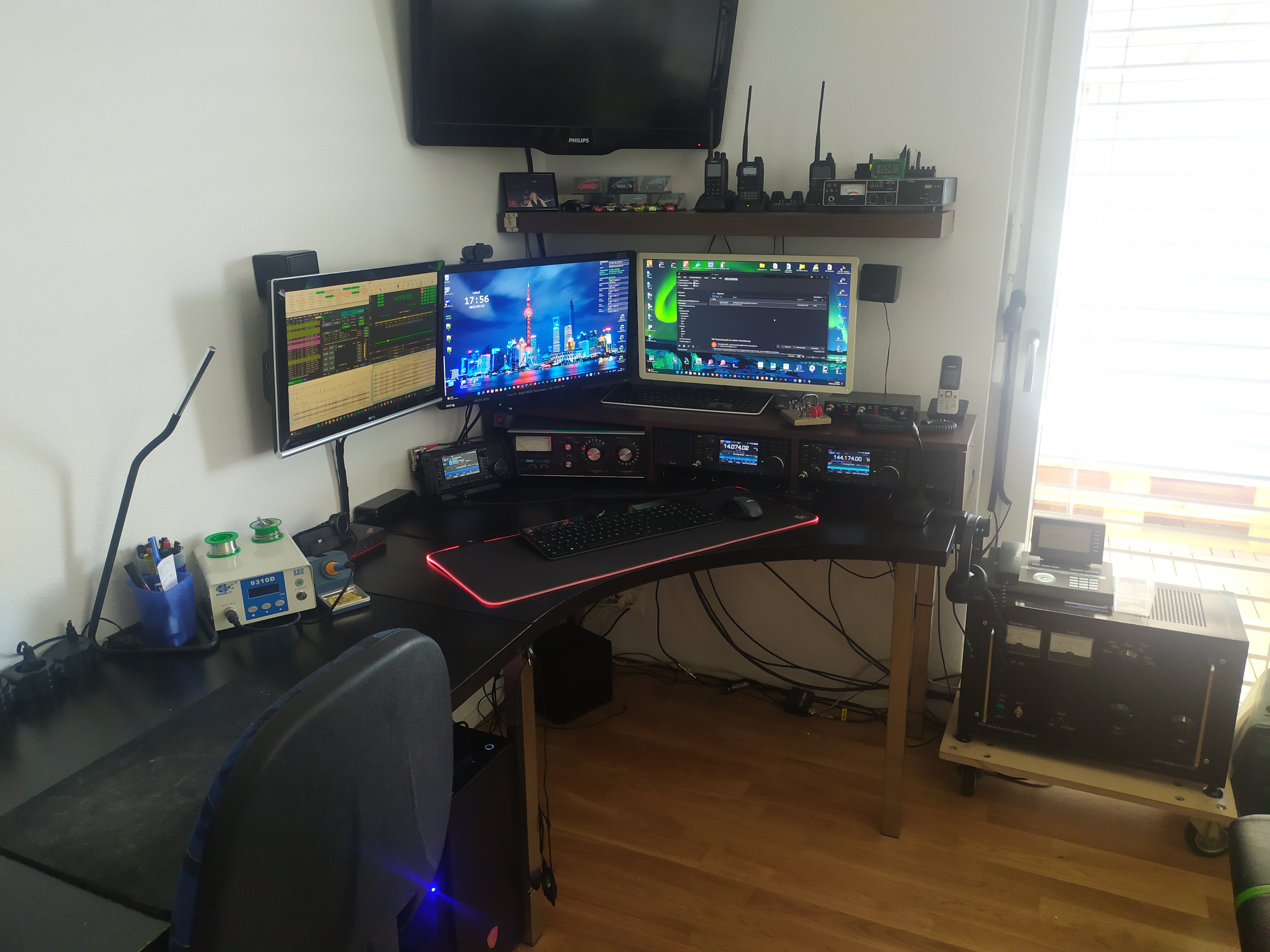 Because I am also interested in computing and all around data as an IT Product/Project Manager I started to build up a DMR+ Gateway.

Later due to changing our activities to the Brandmeister Network it was not needed any more so I started to build up the XLX508 Multimode Gateway and the YSF26446 C4FM Gateway.

Since it is running fine and all works like I expect, I have a bit free time to do other things beside my Amateur Radio Hobby.

My son and me, we are building small devices which can be used to create a conneted home.

We can drive several lights, our 3D Printer and our heating via voice and mobil phone from inside and outside the house.

Development is onging and will be presented here when we have all "homework" of our concept done.


I am not able to built up a big antenna farm here and due to the limitations, I am doing alot of "FT8" from this QTH.

80m and 40m is more or less working every day at every time.

6m I am monitoring and as soon as there is some interesting activity, I am also working there.

I use JTDX as main software connected to JTAlert and HRD to make it as comfortable as possible.

I use the HRD Logbook connected to HRDLog.net to QRZ.com and EQSL.cc.


This is my screen arrangement: 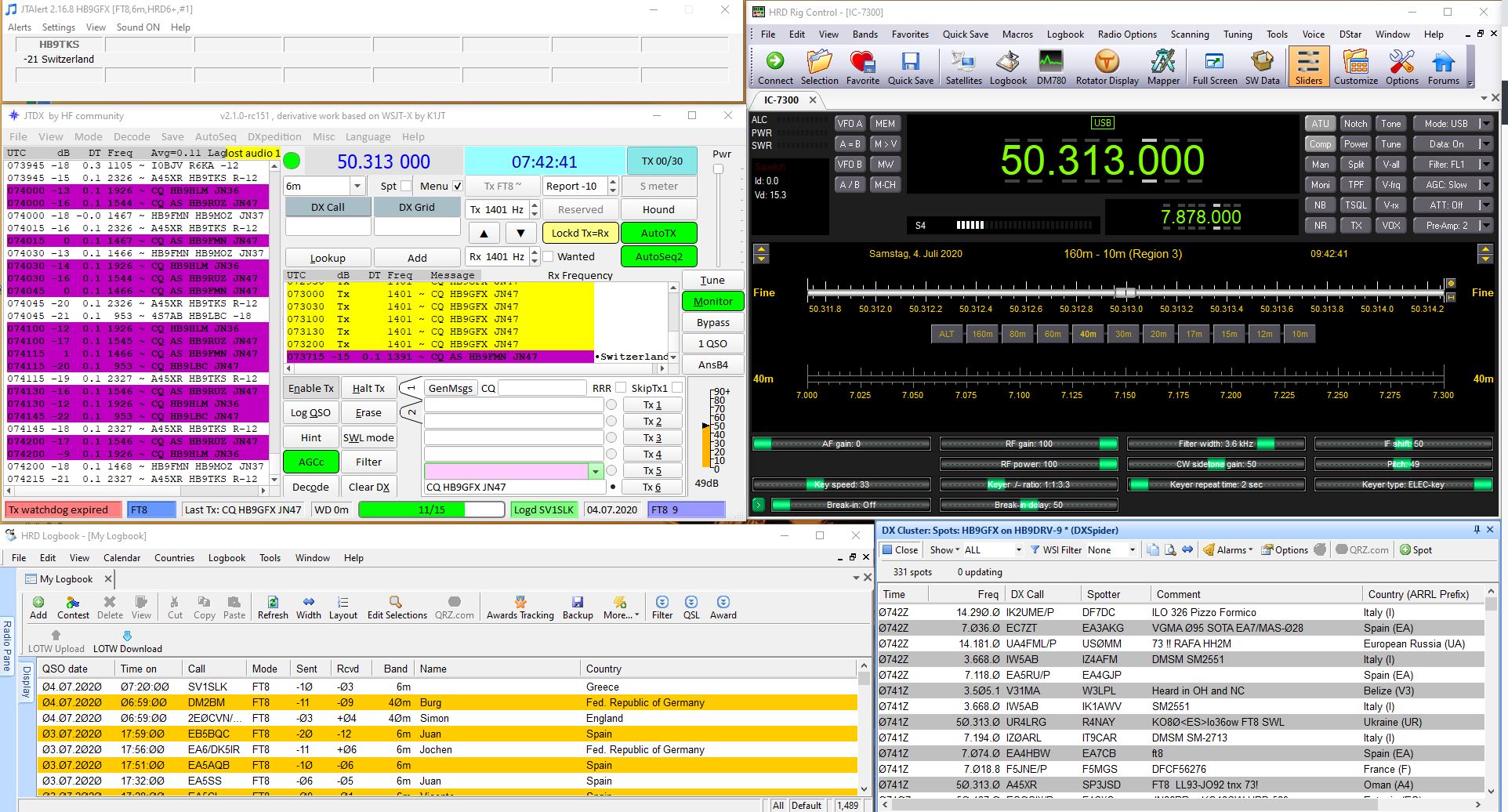 The "Monster AMP" is only used for SSB Mode.


Back to top of page

As often as possible we do weekend trips in a radius of about 250km around our home.

We realy like the area around the Lago Maggiore, and the village of Cannobio.

In our holiday seasons we travel quite often to Italy to the Adria Area.

Our longest trip was Ireland. 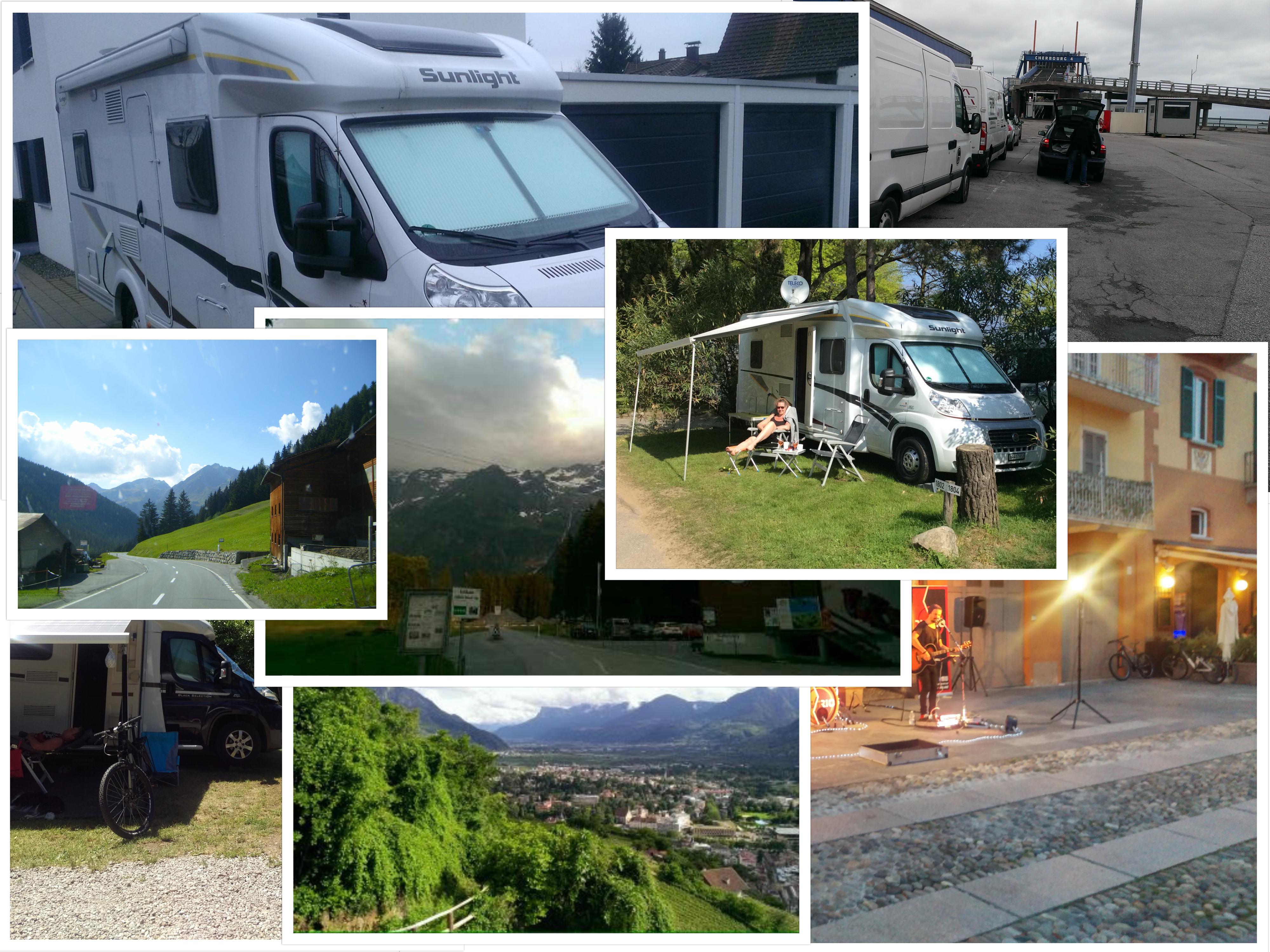 Most of the "extras" I built into the camper by myself.

We have an inverter for 220V with 3000Watts output so we can run our coffee mashine without land electricity and all the other stuff runs on 12V or on Propane Gas.

Also we have a solar panel which gives us back most of the power we used if we are a bit careful with the consume of the battery power.

We are quite well equipped and we can stay complete "autark" for about a week until we need to pick up some fresh water and until we have to dispose of the gray water.

We have a real shower in the RV with a real door to not flood the hole bathroom as well as a 120 liters cooler and a 40 liters icebox. Enough space to store fresh food and drinks for some days.

If there is no space on a RV parking space we can survive also "wilde".

In many cases we navigate to small cheap RV parkings close to the sea. We already found some nice places direct to the Adria beach like here: Fossacesia, Abruzzo. We realy love this place and will go there again as soon as we will go this direction.

We realy like this place, not luxuary but all what is needed is there and very cheap. 12€ per 24h including electricity as much as you need. Sometimes the electricity wiring is a bit adventurous but it worked all the time.